Halloween is the perfect time of year to celebrate nature’s creepies and crawlies—the weird, the misunderstood, and the not-so-cuddly species that call Planet Earth home. From vampire squids and goblin sharks to aye-ayes and naked mole rats, there are many strange animals swimming in the deep sea, hiding in dark forests and jungles, and scurrying below the ground.

Of course, creepiness is not reserved for the animal kingdom; plants can be creepy too! Can you imagine a plant eating a rat? Keep reading to discover five Halloween-worthy species that may just come back to haunt your dreams. #sorrynotsorry

Small copepods called Ommatokoita elongata live a strange life. (That is, if you consider being attached to an eyeball to be strange—and I do.) These copepods not only attach themselves to the eyeballs of Greenland sharks (?!), where they bore in and stay for long periods of time, but they also eat their hosts’ eye tissues. THEY EAT IT. This damages the sharks’ eyes and can cause blindness. 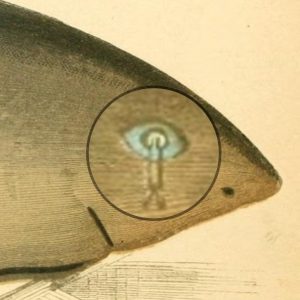 Greenland sharks are large, slow-moving fish that live deep in the Arctic Ocean. Since they live in places with little natural light, they don’t rely too much on their eyesight.

Nevertheless, this is an example of a parasitic relationship because one organism, the parasite (Ommatokoita elongata) benefits by harming its host—in this case, the Greenland shark.

You may have heard of carnivorous (flesh-eating) plants such as the Venus flytrap, which traps and eats small insects, like flies. But have you heard of a plant that can trap and kill something as large as a rat? In Borneo, such a plant exists, and it’s called Nepenthes rajah.

Nepenthes rajah smells sweet, like nectar—a scent that lures all kinds of hungry animals into the plant’s trap. Once an animal, such as an insect or even a rat, slips inside a Nepenthes rajah pitcher, it has a very hard time getting out . . .

First, there’s the waxy inner walls of the pitcher, which make it difficult for a trapped animal to gain a footing. There’s also a spiky lip around the pitcher’s opening, which also helps keep trapped animals from making a dramatic escape. When the prey finally succumbs to its fate, it falls to the bottom of the pitcher into a pool of digestive fluids. You can guess what happens next.

Imagine swimming along the deep seafloor, where it’s dark, cold, and quiet. Suddenly, you come across a blobfish (Psychrolutes marcidus)—a mushy, frowning fish with beady eyes. Would you think you’d landed on another planet?

Once awarded the honor of being the World’s Ugliest Animal, the blobfish does live on Earth (at the bottom of the sea off the coasts of Australia, Tasmania, and New Zealand), but it looks more like a blob of pink, slimy flesh than the average fish. To be fair, it doesn’t look its best above water.

A blobfish’s body is mostly gelatinous mush with little muscle mass. As blobfish float leisurely above the seafloor, they open their mouths and food just drifts in, proving these creatures aren’t scary at all—just really, really weird.

Stealing is not nice in any circumstance, but a weed called Orobanche cumana or “sunflower broomrape” seems to have taken the vice up a notch. Sunflower broomrape is a parasitic weed that infects sunflowers. Its roots make contact with the host sunflower, and then the weed extracts water, sugars, and nutrients from the host.

Here’s where it gets uncomfortable. Sunflower broomrape also appears to steal genes from the plants it’s attacking. (It gets worse.) Then, Orobanche cumana turns these stolen genes into a weapon it uses to kill the host sunflower. Riiight.

The star-nosed mole (Condylura cristata) may look like it has an octopus coming out of its face, but really, it just has 22 tentacle-like appendages attached to its “nose.” (So, perfectly normal!) Native to the northeastern United States and eastern Canada, star-nosed moles live underground where it’s dark and hard to see. They manage just fine, though, because they have a little something extra in the sensory department.

A star-nosed mole’s 22 “feelers” are covered by Eimer’s organs, highly sensitive domes that respond to pressure, vibration, and movement. These touch organs help the animals hunt in the dark, damp, tunnels where they live. Star-nosed moles probe the soil at surprising speed to find invertebrates, such as worms, and to hunt aquatic animals, such as aquatic insects, mollusks, and even small amphibians and fish.

To truly appreciate this predator’s hunting technique, watch the star-nosed mole in action:

And there you have it: five Halloween-worthy species to help you sleep tight tonight!

Which creepy species should we add to next year’s list?

Bethanie Hestermann is a freelance writer and co-author of Zoology for Kids.

This site uses Akismet to reduce spam. Learn how your comment data is processed.